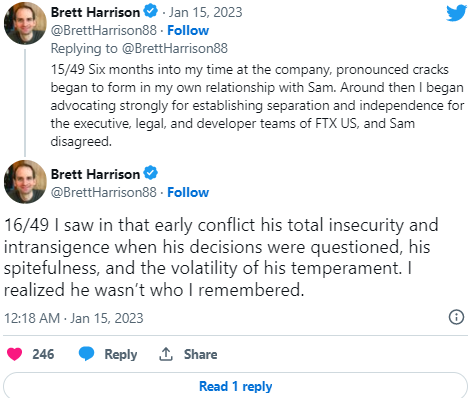 Brett Harrison, who formerly served as the president of FTX US, had taken aim at Sam Bankman-Fried, accusing him of using coworkers in a manipulative and threatening manner when they offered suggestions for reorganizing FTX US’ management structure.

On December 14, Harrison detailed his experiences with Bankman-Fried and FTX US, detailing how he was hired “casually over text” in March 2021. Harrison and Bankman-Fried had previously worked together at the New York-based trading business Jane Street for several years.

According to Harrison, “cracks began to emerge” between the two of them approximately six months into Harrison’s career at FTX US.

Harrison stated that he observed “total insecurity and intransigence” in Bankman-Fried when the latter was confronted with conflict, particularly when Harrison suggested that FTX US establish separate branches for its executive, developer, and legal teams. Harrison initially remembered Bankman-Fried to be a “sensitive and intellectually curious person.”

Harrison said that he “wasn’t sure what accounted for the abrupt change” in Bankman-Fried’s erratic behaviour, but he felt mental health difficulties may have played a “contributing role.”

This illogical behaviour that Harrison describes comprised a series of gaslighting and manipulative tactics that Bankman-Fried employed against Harrison and other coworkers as they attempted to clean up the corporate mess at FTX US. Harrison recalls how Bankman-Fried targeted him.

Harrison also recounted his most recent attempt to resolve the organizational issues affecting FTX US with Bankman-Fried. He claimed that Bankman-Fried threatened to “destroy my professional name” if he did not receive an official apology.

Concerning the current allegations of fraud that have been brought against Bankman-Fried and other members of the FTX team, Harrison has stated that he was blindsided by the company’s alleged commingling and misuse of billions of dollars worth of client funds:

“I had no idea that beneath these kinds of concerns — which I’d encountered at other more mature organizations in my career and assumed weren’t fatal to economic success — was multibillion-dollar fraud.”

Bankman-Fried was able to post bail after filing a not-guilty plea to all eight of the criminal complaints that were made against him on January 3 and offering a bond guarantee in the amount of $250 million. This allowed him to be released from custody.

On September 27, almost five weeks before FTX suffered a catastrophic failure, Harrison stated that he was stepping down from his job as FTX US President and going into an advisory role instead. Harrison’s announcement came on September 27. In conjunction with the announcement, Harrison tendered his resignation.